In March/April I shall be having a solo exhibition at the Gallery Upstairs, The Fisher Theatre, Bungay.  The title is ‘Observations at Hallwong’, – a mythical place.  I live in Hallwong Lane, Starston, (some readers may have visited the house which i and my wife Jane German, also a painter have opened in the past for the Harleston and Waveney Art Trail Open Studios.)  As I said, Hallwong is a mythical place because nobody knows quite where it begins and ends.  Wang or Wong are Anglo-Saxon words, mainly found in poetry, meaning ‘field’ ‘land’ or ‘place’; ‘Hall’ might mean ‘healthy’ (as in ‘hale’)or ‘a secret corner’.  At all events, I think of myself as living in the middle of a place called Hallwong, traceable back in its use to Anglo-Saxon and Norse farmers.

Many of my paintings and drawings are about what this particular countryside is like now, which is to say that it is very different even from what it was like at the end of the war.  For instance, there are many fewer, but much larger, fields, with hardly ever anyone in them.  In Breughel or Constable’s times the fields were full of people working.  This rate of change is likely to accelerate.  My aim as a painter is not mainly to record the state of the countryside, this changing agricultural production site, which town dwellers look at as a sort of parkland.  It’s more a response to its effect, and the extraordinary things we see, if we are looking clearly, brought about by seasonal change, light, changing agricultural use, and the large machines carving up the land. 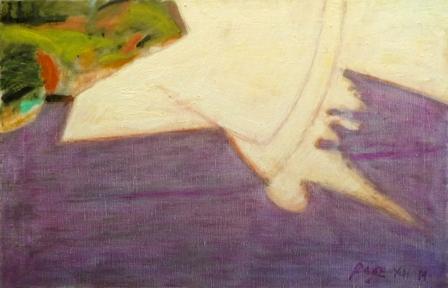 The Private View of this exhibition will be on 17th March, from 4 to 6pm, and anyone who would like to come is invited.  Otherwise it will be open to the public from 17th March to 18th April, from Monday to Saturday 10am – 3pm, and during performances.  Welcome to my Hallwong-centred world.

Upcoming Events in the Village